The blunt answer to the above question is, not really. Since the late 1950s, a few daring souls have completed incredible high-altitude jumps. But the public sometimes confuses these leaps from the boundary of our planet’s atmosphere with skydives from outer space. The difference is a whopping 60km. The question is: is skydiving from space even possible? If so, how can it work?

First of all, we need to establish where Earth ends and space begins. The widely accepted definition of that boundary is 100km above sea level. This is the Kármán Line, which marks the beginning of the thermosphere. At this level, auroras dance in the skies. Just 300 more kilometers and you’d be in orbit beside the International Space Station.

The stratosphere is not outer space

The farthest anyone has ever jumped from is 41.425km above sea level (stratosphere). The stunt took place in 2014 by computer scientist Alan Eustace. His freefall lasted 15 minutes. Eustace broke the record free fall by Austrian skydiver Felix Baumgartner in 2012.

In the 1960s, Joseph Kittinger and Yevgeni Andreyev jumped from 31.3km and 25.458km respectively. These daredevils used gas-filled balloons to lift them to those heights. However, beyond a certain altitude, the obstacles become deadly.

Equipment-wise, the skydiver needs an extremely strong parachute to withstand deployment at such high speeds. Terminal velocity becomes 7,200kph. Even higher, at the ISS, you would go at 27,600kph. Opening a parachute at that speed would be fatal.

Secondly, a potential outer space skydiver needs a suit that exceeds the latest technology. It requires a far greater oxygen supply than regular spacesuits have, a carbon dioxide absorber, cooling mechanisms, and material that can withstand extreme heat. The suit needs to protect the diver from pressures and temperatures that can boil their blood from the inside.

This brings us to the biggest hurdle: re-entry. No space suit could possibly combat the heat of re-entry into our atmosphere. A hurtling figure rubbing against all those air molecules would heat up to 1,370°C. Spacesuits worn by today’s astronauts can endure only one-fifth of that temperature. 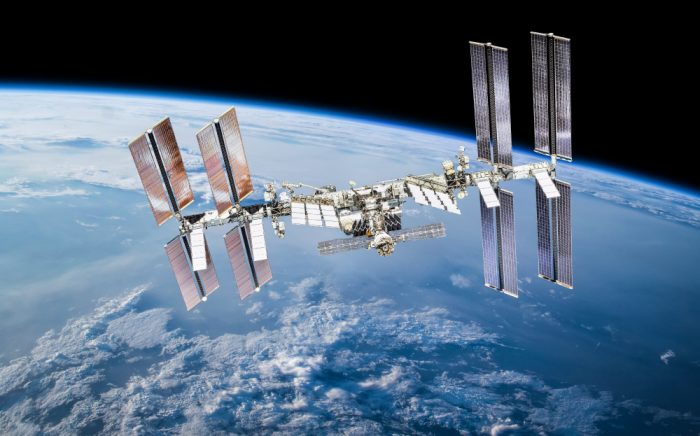 In the scenario of a skydive from the ISS, a diver would likely encounter space debris or satellites, all of which travel at tens of thousands of kilometers per hour. Even a tiny pellet at those speeds would strike like a bullet.

If someone jumped off the ISS, they would not immediately fall to Earth. They would orbit for quite a while — some estimate two years, which would require a lot of food and water, besides air! — before their orbit began to decay. The space station has thrusters that counteract gravity and keep it in orbit. But our skydiving astronaut, if he has not already starved to death, died of hypoxia, or been riddled with bullet holes from space debris, would burn up in the atmosphere like a little falling star — a flash and then gone.