A recent report by US magazine The National Interest demonized China’s achievements in space by interpreting China’s space exploration missions, including the lunar program and manned spaceflight, as “threats to US leadership in space” and a “detriment to US national security.” This report is just the type of iceberg in the US’ sustained attempts to suppress and discredit China’s space program. The US has also published military reports that incorrectly describe China’s military capabilities in space, with the new NASA chief personally slandering China’s space achievements, promoting the mindset of a new Cold War in space and the “China threat” theory. But facts show that the US is the biggest threat in space with its space hegemony based on its technological advantages. Meanwhile, China sees space as a new field to expand international cooperation while sharing its achievements with other countries by providing them with opportunities to make use of space resources.

The crew members of Shenzhou-14 greet people before their launch on June 5, 2022. Photo: VCG

US hype of Chinese militarization in space ‘nonsense’

“This NASA chief has a subpar standard with a small mind,” Deng Yulin, an academic at the International Academy of Astronautics, said in an interview with the Global Times, commenting on the allegations in May by NASA’s Administrator, Bill Nelson, that China is “good at stealing” American designs in the “space race.”

Nelson seems good at hyping the China-US competition in space, with US media often comparing it to the space competition during the Cold War between the US and the USSR. He also likes to link China’s space program to military purposes, as he told German newspaper The Bild in July, saying that “China’s space program is a military one,” “Beijing was learning how to destroy satellites launched by other countries” and “China might take over the moon.”

NASA is one of the US’ most renowned scientific research institutes but Nelson has repeatedly made remarks that go against the spirit of science. This is just an example of the attempts by US domestic forces to contain China. Facing fast-advancing Chinese space development, some US politicians and military leaders who seek to maintain US hegemony ignore China’s efforts in the peaceful use of space and are attempting to make it a new battlefield for China-US competition.

Since Donald Trump’s administration established the Space Force in 2019, the US military has repeatedly listed China’s space program as its “imaginary enemy.” The Pentagon’s 2021 edition of Military and Security Developments involving the People’s Republic of China, listed China’s space capabilities as part of its military capabilities, calling infrastructure such as the Chinese space station, the BeiDou Navigation Satellite System, and the Gaofen series remote-sensing satellites , which benefit the people, as military facilities. In the US’ eyes, China’s routine rocket launches reflect its military capabilities in space. A US Defense Intelligence Agency report in April claimed that, as of January 2022, the People’s Liberation Army (PLA) now owns or operates “about half of the world’s intelligence, surveillance, and reconnaissance systems, most of which could support the monitoring, tracking , and targeting of US and allied forces worldwide.”

But ironically, just as the US military promoted China’s space infrastructure as being used for military purposes, three Chinese taikonauts had a “Tiangong Q&A Session” with a number of US students. Cosmic exploration and scientific research are never-ending and require concerted human efforts, said the Chinese Ambassador to the US Qin Gang. “We hope that the younger generation of both China and the US can be as courageous as the taikonauts, chasing their dreams and making contributions to humanity,” Qin remarked.

It was clearly stated in the “China’s Space Program: A 2021 Perspective” white paper released in January 2022 by the State Council Information Office that China has always advocated the use of outer space for peaceful purposes and opposes any attempt to turn outer space into a weapon or battlefield or start an arms race in outer space. China develops and uses space resources in a prudent manner, takes effective measures to protect the space environment, ensures that space remains peaceful and clean and guarantees that its space activities benefit humanity.

The goal of China’s space program has always been the peaceful use of space and promoting the development of a community of a shared future for mankind, which is a whole different concept from the space competition between the US and the USSR, Deng, the academic at the International Academy of Astronautics said. US characters like Nelson hype the China-US space competition because they want increased funding and have been put under pressure by the rapid speed of China’s space development, he said.

US named the biggest threat in space

In late 2021, the UN Committee on the Peaceful Uses of Outer Space revealed that the US company’s Starlink satellites had two close encounters with the China Space Station, leading the latter to implement preventive collision avoidance control for safety reasons.

The two encounters were revealed in a note, dated December 3, by the Permanent Mission of China to the United Nations.

The event had threatened the lives and safety of the taikonauts aboard the space station and exposed US spacecrafts’ wanton activities in space that frequently threaten the normal operations of spacecrafts from other countries.

But the US sees the evasive maneuvers of the Chinese spacecraft to avoid its satellite as a threat. US news outlets, including Space News, previously revealed several events in which Chinese and US satellites “encountered” each other in space. In a case earlier this year, US space surveillance satellite USA 270 maneuvered to get a closer look at two Chinese satellites soon after they reached geostationary orbit.

As the US satellite closed in, the Chinese satellites took off in opposite directions, with one moving into position to get a sunlit view of the US surveillance satellite.

Some US space experts with military background claimed the evasive maneuvers of the Chinese satellites proved China has gained “anti-space” capabilities. 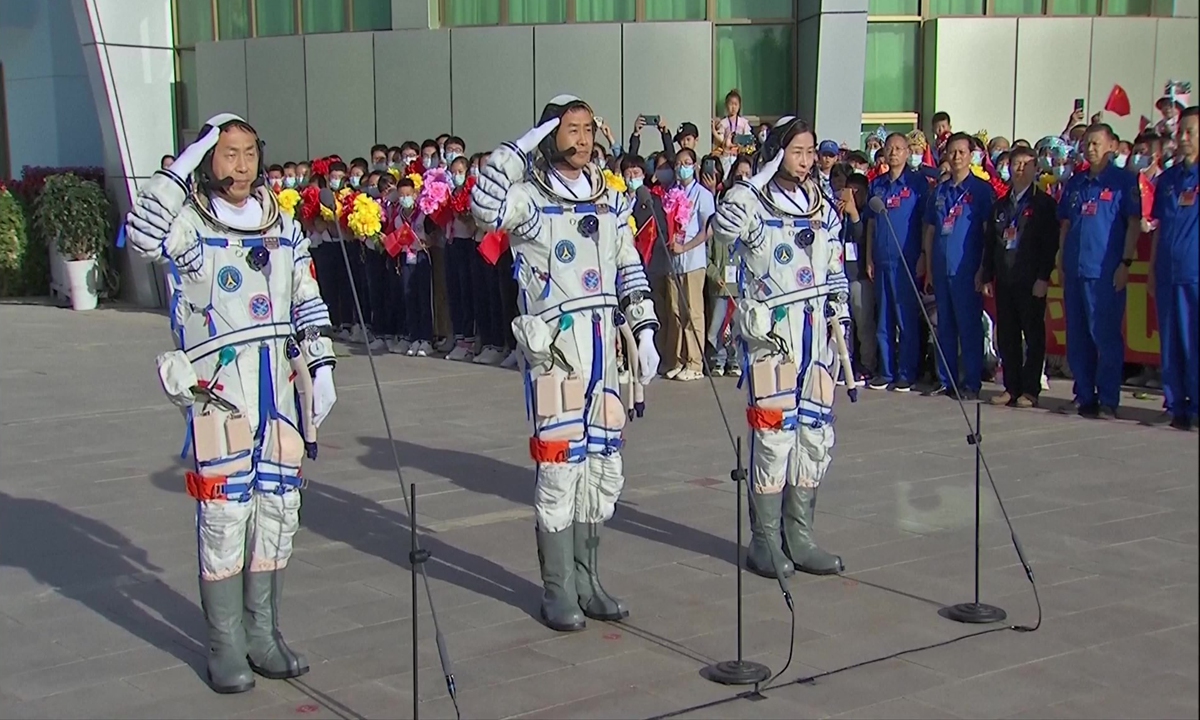 Liftoff of the Long March-5B from Wenchang, South China’s Hainan Province on May 5, 2020. Photo: VCG

But it is obvious that it is the spying activities of the US in space that pose enormous security threats, and the propaganda from the US media against defensive measures of the Chinese satellites is just a vile trick.

Huang Zhicheng, a Chinese expert in aerospace science and technology, told the Global Times that the US has long been militarizing space and is eagerly developing space weapons. For a long time, the US has been developing technologies to disrupt and capture other satellites.

With the concept of establishing a community of a shared future for mankind, China is aiming to build a space environment that all mankind can use peacefully, Huang said.

It is the US that needs arms control in space and to shoulder more responsibilities in space traffic management to give humanity a peaceful, prosperous, and open space environment, Huang said.

Hegemonic mindset finds it difficult to understand path of cooperation

US media outlets often judge China when reporting on China’s space program, seeing China’s space development from the view of the US mindset of hegemony. The National Interest report in July claimed that China’s advancements in Tiangong Space Station, International Lunar Research Station, and small satellites were “part of its strategy to rewrite the rules of conduct in outer space,” and China could “flout” international norms. including the only binding pact, the Outer Space Treaty.

But unlike the US, which makes no secret of its pursuit of space hegemony, China’s space program has always been a reflection of the Chinese people’s efforts to advance and contribute to the whole world, from the successful launch of China’s first artificial satellite in 1970 to the imminent completion of China’s space station in 2022. From the determination to rely on its own efforts reflected in the Spirit of Two Bombs, One Satellite, to the sincere devotion highlighted in the Spirit of Manned Spaceflight, the cooperation and mutual benefits stressed in the Spirit of Lunar Exploration, and the openness and integration outlined in the BeiDou Spirit in the New Era, the spirit of the Chinese people in space exploration advances through time and demonstrates to the whole world a Chinese path, a Chinese spirit, and Chinese strength.

Since 2016, China has signed 46 space cooperation agreements or memoranda of understanding with 19 countries and regions and four international organizations. It has actively promoted the global governance of outer space and carried out international cooperation in space science, technology, and applications through bilateral and multilateral mechanisms, according to the white paper of China’s space program. China has maintained a comprehensive cooperation with members of the European Union, countries and regions participating in the Belt and Road Initiative, members of ASEAN, the African Union members, the League of Arab States members, and countries in South America, in many space sectors. including manned spaceflight, BeiDou Navigation, and deep space exploration.

China always combines independence and self-reliance with opening up to the outside world, the white paper said. China actively engages in high-level international exchanges and cooperation and expands global public service for space technology and products. It takes an active part in solving major challenges facing humanity, helps to realize the goals of the United Nations 2030 Agenda for Sustainable Development, and facilitates a global consensus and common effort on outer space exploration and utilization.

Rumor:
NASA Administrator Bill Nelson said in German newspaper the Bild in July that “China’s space program is a military one,” and Beijing was learning how to destroy satellites launched by other countries and “China might take over the moon.”
fact:
China has always advocated the use of outer space for peaceful purposes, and opposes any attempts to turn outer space into a weapon or battlefield, or start an arms race in outer space.

Rumor:
A Pentagon report in 2021 listed China’s space capabilities as military threats, calling infrastructure such as the Chinese space station, the BeiDou Navigation Satellite System, and the Gaofen series remote-sensing satellites military facilities.
fact:
Three Chinese taikonauts in April 2022 had a “Tiangong Q&A Session” with a number of US students, promoting the ideal that cosmic exploration and scientific research are never-ending and require concerted human efforts.