It’s always sort of fun to catch The New York Times when it makes a chemistry error. It happens from time to time, especially when they are writing about chemistry. I just caught one, but this time it’s not their fault.

“What’s Really Going on in Those Police Fentanyl Exposure Videos?” is an important feature written by Zachary Siegel for the Times Magazine. The article chronicled the apparent contradiction between the responses of some police officers who had touched street fentanyl and the expected symptoms of a fentanyl overdose. The conclusion? The officers were experiencing panic attacks – something that all the Narcan in the world won’t touch.

Siegal also cited a 2019 piece from the Times Editorial Board:

Opioids have to enter the bloodstream to exert an effect, and not even the strongest ones can penetrate the skin quickly enough or in sufficient quantity for that to happen.

It is here that Siegal makes a rather odd chemistry error in his piece [emphasis mine]:

“[A]33-year-old clinical toxicologist and emergency-medicine pharmacist named Ryan Feldman co-published a case study about the time he accidentally spilled a mammoth dose of pure liquid fentanyl all over himself at work; he simply washed it off, with no adverse effects.

The problem? There is no such thing as “pure liquid fentanyl,” that is unless you take pure solid fentanyl – its normal state – and melt it, a process that involves heating the stuff to a temperature of 190°F, slightly lower than that of boiling water (two). I can think of plenty of reasons why you may want to avoid this, especially since if you pour, let’s say, a few ounces of boiling hot pure liquid fentanyl on your skin you not only won’t have skin left to penetrate but also the amount of molten fentanyl that now, in the absence of a skin barrier, will be absolutely absorbed into the fat, blood, and decomposing flesh will probably be something like one-million times the lethal dose of the drug. A pretty bad chemistry error, but this one cannot be laid at the feet of the Times; Siegel got the term from the paper that the Times cited to prove its point:

Getting back to the paragraph above where three rather disparate findings were presented I’m going to pick the Feldman and Weston paper (#1). why? Both of the other papers were based on laboratory models of skin cell penetration which are somewhat useful in predicting the relative ease of penetration of different chemicals but tell you little about how much will actually get into the blood. It is paper #1, even though it’s a single case study, that should put the myth of the dangers of simply touching a fentanyl-contaminated counterfeit pill to rest. Because if anybody was going to be poisoned dermal contact with the drug it’s the unfortunate individual who had Este happen [emphasis mine]:

This case details a dermal exposure to a large dose of analytically confirmed pharmaceutical fentanyl (fentanyl citrate, 10 microgram fentanyl base per ml), over a large skin surface area. Additionally, the exposure occurred at a site with some skin barrier compromise, a factor that can increase fentanyl absorption. The patient underwent appropriate decontamination and underwent a brief medical assessment with no clinical effects of opioid exposure observed.

(It should also be noted that solutions are much more likely to penetrate the skin than the dry chemical.)

Rather than “liquid fentanyl,” the authors were, of course, referring to water fentanyl-a watersolution of fentanyl, which contained 10 micrograms of the drug dissolved in 1 mL of water. Let’s illustrate the difference. 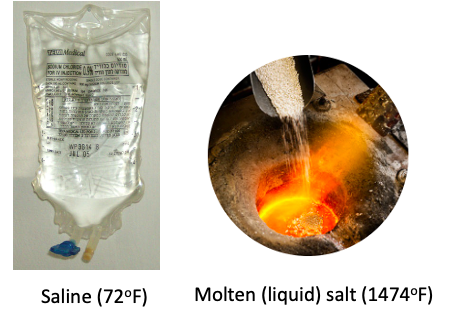 Granted, this is a single case study but it certainly tests the skin hypothesis and then some. The volume of fentanyl solution that was spilled is not given, but since it covered a large skin area I’m going to take a wild guess – four ounces (118 mL). Now let’s screw up do some math.

118 mL of a 10 microgram per mL solution will contain 1,180 micrograms (1.18 mg) of the drug. The lethal dose of fentanyl is estimated to be about 2 milligrams with significant individual variability. And fentanyl patches for pain (two) come in four doses, the highest dose patch designed to deliver 100 micrograms of the drug per hour. Since the victim of the spill was exposed to an amount approximating one-half of a lethal dose and 12-times that of the highest-dose patch yet washed it off and walked away without incident it’s a damn safe bet that little or no fentanyl went through the skin, even though this person had a “skin barrier compromise” (presumably a cut).

So, while inhaling or swallowing the stuff you can get in all kinds of trouble a simple spill should not. But in chemistry, there are always exceptions. Which means it’s time for the long overdue… 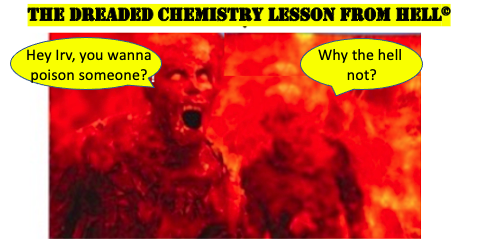 Irving and Steve return. They were sorely missed.

Guess who’s back?! Our old friends (and the hosts of TDCLFH®)Steve and Irving! Yes, they’ve been absent for a while but not without good reason. Steve had been dodging goiter surgery since the 14th century, but the thing finally reached the size of a Vedalia onion and he had to take action. When Dr. Oz’s “Magic Goiter Burner” failed to work he relented and went under the knife, and was off his feet (assuming he has any) for a while. Irving, the most adventurous of the two and a sports fan, hit the road to Texas to see attend a minor league baseball game in which the Amarillo Sod Poodles hosted the Corpus Christi Hooks. But Amarillo was too hot so he returned home. 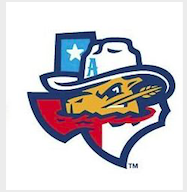 When it comes to skin penetration, solvents matter.

Ethyl alcohol is one of many known chemicals that help carry chemicals into the skin. This is typically shown by dissolving the chemical in either ethanol (or gels that contain it) and water and comparing the amount of chemical that gets through. Compared to water, ethanol will almost always be superior in helping chemical substances pass through skin. This includes fentanyl, although your chances of accidentally stumbling upon an alcohol solution of fentanyl are about zero.

But the alcohol need not be applied to affect absorption! A study in drunk rats showed that the alcohol in the skin of the rat enabled chemicals like herbicides, pesticides, and mosquito repellents to get into the blood of the “polluted” rats 2-5X better than in their teetotaler counterparts over a 24-hour period. This led study author Rhonda M. Brand to conclude:

“Extra care needs to be taken when handling chemicals if you’ve been drinking, even if it was a day earlier.”

Wise advice for all.

Acetone is of special interest to organic chemists because it is the solvent we use to clean dirty glassware. During our careers we were probably slop many thousands of gallons of the stuff all over us along with all the chemicals that it washes out of flasks. A Taiwanese study showed that acetone enhanced dermal penetration of sucrose, progesterone, caffeine, and hydrocortisone, making me wonder how any organic chemist makes it to his 40th birthday. A spill of fentanyl in acetone would be mighty scary.

Dimethyl sulfoxide is the king of solvents. Almost all organic (carbon-containing, with a few exceptions) chemicals will immediately dissolve in the stuff. And certain inorganic chemicals (lacking carbon) will also yield to its royal solvating powers while laughing dismissively at other solvents like ether, chloroform, or benzene. And DMSO is notorious for carrying chemicals through the skin.

The classic example here involves potassium cyanide. Although pouring a water solution of sodium or potassium cyanide on your skin is far from a splendid idea it probably won’t kill you, at least right away. The same does not hold true for a cyanide/DMSO solution.

“Skin contact [of a water solution] is not as much of a concern unless the cyanide has been mixed with DMSO.”

It goes without saying that if the fentanyl exposure described in the Times Magazine involved a DMSO solution instead of a water solution the conversation would be quite different.

Finally, DMSO itself when applied to the skin is not toxic. You might remember that in the 1980s DMSO was touted as a treatment for arthritis (it doesn’t work). People with arthritis were slopping it all over themselves to no avail. Because I had a lab and was such a good grandson didn’t want to be cut out of her will I once distilled some in and brought my grandmother a bottle of it. It did nothing for her aches and pains de ella, however, she died 9 years later. Did I inadvertently kill my grandmother? I doubt it. There are more than 400 DMSO-containing products on Amazon. They are sold as “supplements,” of course, even though the stuff is FDA-approved only for painful bladder syndrome, something I don’t have to look up to know that I can easily live my life without ever experiencing it.

Although deadly when inhaled or ingested, fentanyl, either as a solid or water solution doesn’t pose much of a risk. But this should be obvious already. When pain patients who have been cut off from their meds go to the street to buy oxycodone and instead get a bunch of fentanyl-spiked M-30 counterfeits they do not die from holding the pills in their hands, only after taking them.

(1) The drug was actually fentanyl citrate, which is the citric acid salt of fentanyl, a base. Citrate is a common counterion (in this case an anion) found in drugs because it is harmless. Other common salts of basic drugs (the salts are more water soluble) are hydrochloride, fumarate, mesylate…many more.

(2) An illustration of the difficulty of transdermal drug delivery is the Durogesic transdermal fentanyl patch. The highest dose patch is designed to deliver 100 micrograms of fentanyl per hour for 72 hours, a total of 7.2 mg of fentanyl. How much fentanyl is actually in the patch? It’s 16.8 mg, meaning that less than half of the drug is delivered through the skin from a patch that is specifically designed to do just that.