More than 100 leading experts, post-doctoral researchers and students from around the world recently descended upon the University of Toronto to share their quantum research.

The ninth biennial Center for Quantum Information & Quantum Control (CQIQC) conference, a week-long gathering that wrapped up earlier this month, was held at the Fields Institute on the St. George campus and was organized by the Faculty of Arts & Science’s CQIQC research nexus.

“The has always been a wonderful opportunity to bring together leaders and young researchers from all sorts of different sub-areas in the field for a week in Toronto,” says University Professor aephraim steinberg of U of T’s department of physics and lead organizer of the conference.

“It’s very exciting for us because we get to talk to people in our own specialty or in different specialties. It’s a chance to get a broad view of what’s exciting and what’s going on in the field.”

CQIQC – pronounced “see-quick” – is the interdisciplinary umbrella organization for quantum research at U of T. It promotes research collaborations in theoretical and experimental activities; educates and trains students; runs a variety of programs such as post-doctoral fellowships, summer internships for undergrads, visiting professorships and awards; and runs a successful seminar series.

More than a hundred leading experts, post-doctoral researchers and students from around the world met at the ninth biennial Center for Quantum Information & Quantum Control (CQIQC) conference (photo by Diana Tyszko)

“Our members are from science and engineering departments and are working on both fundamental and applied aspects of quantum science and technology,” he says Dvira Segalthe center’s interim director and a professor in the department of chemistry.

“The centre’s ambition is to advance quantum research and education in Canada and establish U of T as a world-class research institute in the quantum field. We foster and facilitate interactions and collaborations between various research groups within the university and internationally, as well as promote partnerships with industry.”

The interdisciplinary conference featured five days of invited and contributed talks exploring all topics quantum – which are available on the conference website.

Experts from Stanford University, MIT, Harvard University, Duke University and other institutions, as well as scientists and entrepreneurs from startup companies, shared advances they’ve made in quantum computing and quantum supremacy – a term used to describe when a quantum computer solves a problem that can’t be solved by a classical computer in a reasonable amount of time.

Some talked about the ramifications of quantum advances on the cryptography that protects our digital and network transactions. Some discussed the practical challenges in building quantum computers and the quantum algorithms they run. Others explored more fundamental topics in quantum physics, including the nature of quantum phenomena and what makes them quantum. 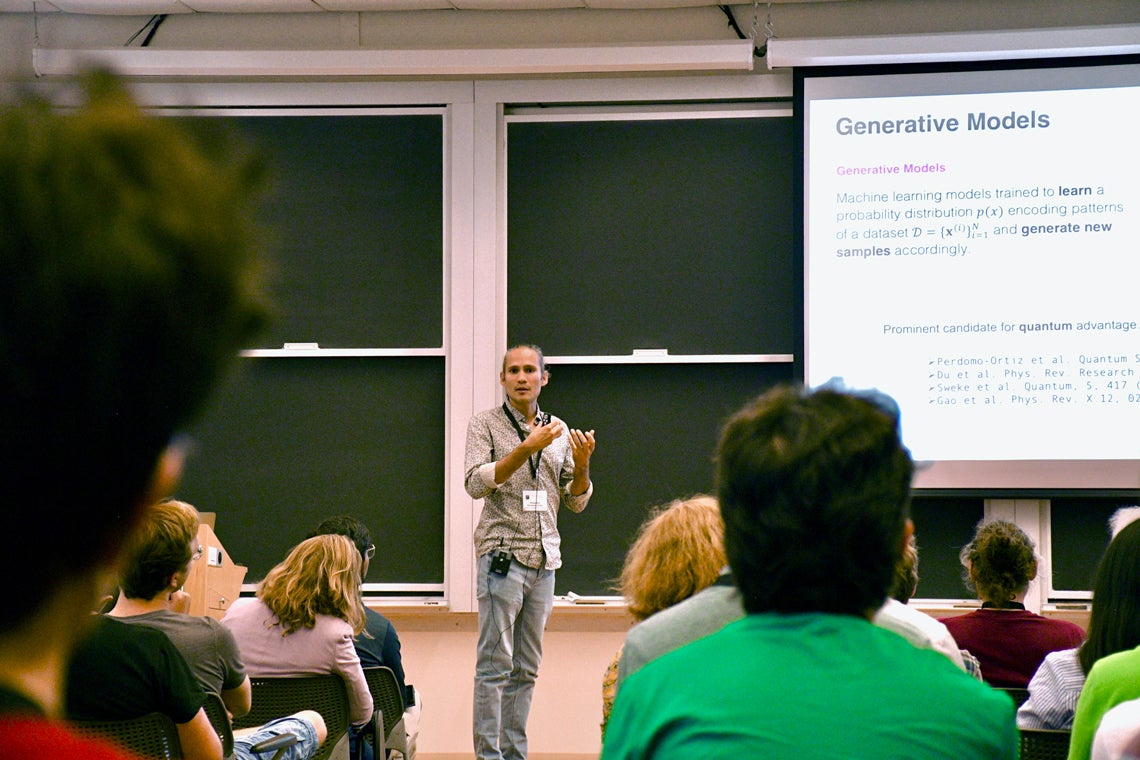 The conference provided students from around the world with an opportunity to share their research with attendees in discussions and poster sessions, and a chance to network with leading researchers in the field.

Daniela Angulo Murcillo, a graduate student in the quantum optics group in U of T’s department of physics, presented a poster, “Measuring the Atomic Excitation Time due to Narrowband Resonant Photons that are Transmitted,” that described work she and her collaborators are conducting under the supervision of Steinberg .

“I truly enjoyed this conference because of the variety of subjects involved – from foundational topics like contextuality to technological applications like quantum computing,” says Murcillo.

“I was inspired to explore new subjects by passionate scientists telling us about their work; reading about boson sampling is my new hobby! I was also able to discuss my work with other students and professors, and their questions tested me to find different strategies to explain my research.” 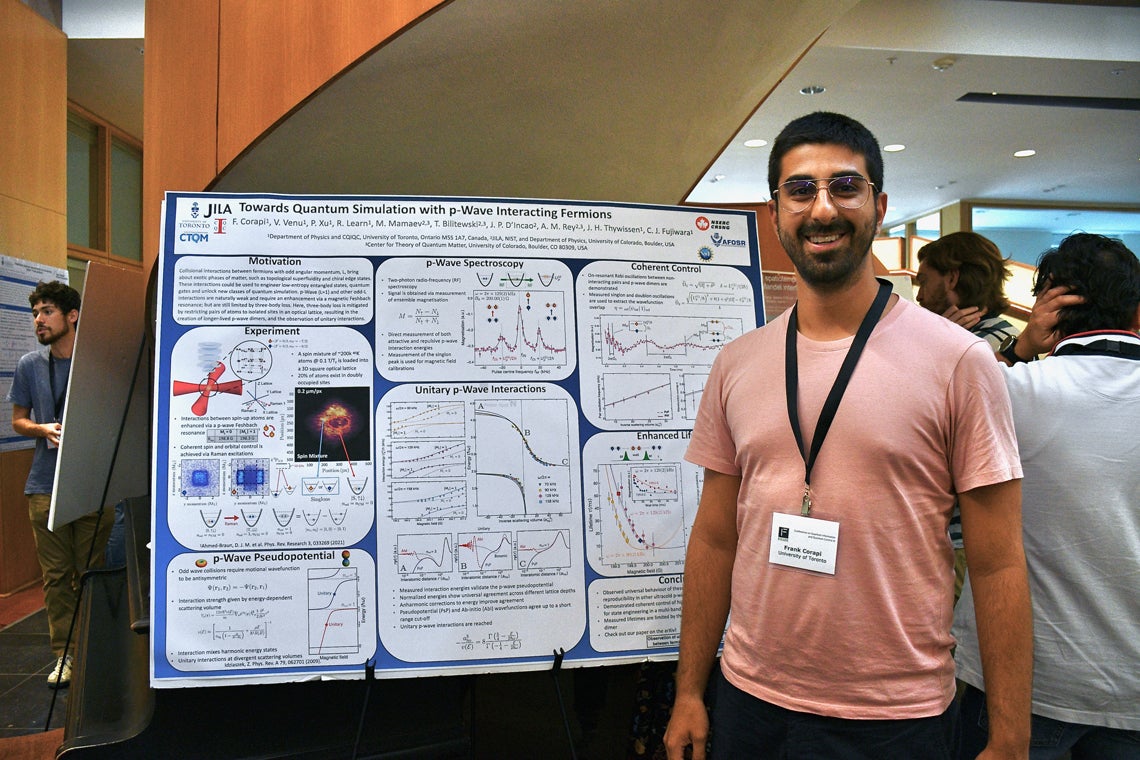 Frank Corapi, a graduate student in the quantum optics group in the department of physics, participated in the conference poster session (photo by Diana Tyszko)

Frank Corapi is another graduate student in the quantum optics group. He presented a poster, “Towards Quantum Simulation with p-Wave Interacting Fermions,” describing research he and collaborators conducted under the supervision of Joseph Thywissena professor in the department of physics.

“I greatly enjoyed my time at the conference,” says Corapi. “Discussing my research with some of the other attendees provided me with new perspectives on concepts I’d been thinking about for a long time. The various talks and posters were also quite interesting, and the entire experience left me with many ideas to bring back to the lab.”

For Steinberg and others at CQIQC, the conference continues to be one of the ways the center is fulfilling its mission.

“CQIQC has been around for more than 20 years, and we’ve been running this conference for almost the entire time,” says Steinberg.

“We’re undergoing continued growth and are always bringing in more students and faculty who are pushing the boundaries of this area – and we’re proud the conference has become one of the international mainstays of the quantum information meeting circuit.”

Anna DyringCQIQC’s quantum strategic initiative lead and one of the conference organizers, says the interest from students and young people, including undergraduate students, was “striking,” as was the large presence of industry representatives and startups.

“These outcomes are hopefully a sign of a growing and maturing field, and feels very encouraging for the future.”