Since it first launched in 2019, Washington state’s Environmental Health Disparities Map has been used to help decisionmakers and government agencies engage with overburdened communities to clean up pollution, improve buildings and electric grids, plant trees and many other projects.

Using a complex matrix of data, this open-access, interactive map ranks Washington’s nearly 1,500 US census tracts by health risks due to environmental degradation and economic and health disparities. It acts as a guide for state agencies and the legislature to improve environmental and economic justice and is included in the state’s Healthy Environment for All (HEAL) Act.

Now the University of Washington, one of the original partners in the creation of the map, is helping the Department of Health launch a new version, updating the data and methodology for how the map ranks vulnerable areas. The newly updated map went live on July 28.

“The original request for this map tool came from community members who felt that researchers and government programs were looking at either air or water quality, treating them as separate. But communities experience them together, and so they wanted to know if there was a better tool that could communicate the cumulative impact of pollution,” said Esther Min, a UW researcher who led the creation of the original map as well as its updated data and methods.

That was in the fall of 2016. At that time, Front and Centered, an environmental justice coalition of organizations rooted in communities of color, several state agencies and the UW Department of Environmental & Occupational Health Sciences formed a working group that eventually published the first version of the map.

“It brings together not just the harms to communities from pollution through an environmental health lens, but also shows a community’s vulnerability — what makes certain communities less resilient to environmental degradations,” said Min, a clinical assistant professor of environmental and occupational health sciences in the UW School of Public Health. “The map does a really good job of framing that and communicating that.” 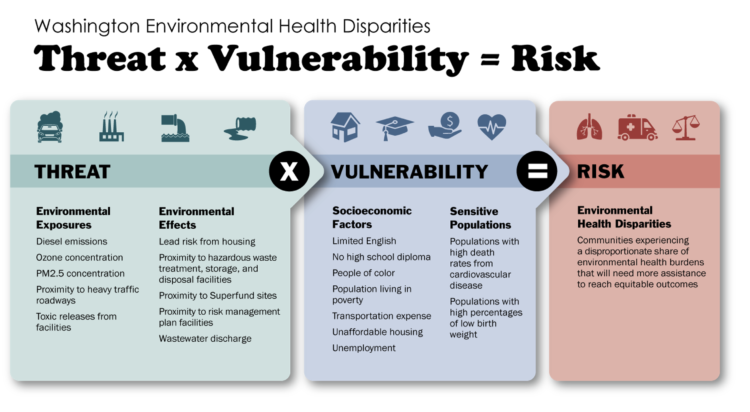 How the Environmental Health Disparities Map creates its risk ranking of Washington’s nearly 1,500 US census tracks.

“The Environmental Health Disparities map is our most popular data product, used by organizations — big and small — across the state,” said Jennifer Sabel, manager of the Washington Tracking Network, which publishes the map. “With this version release, the data will be updated to reflect the changes that have happened since we first launched the map. This will lead to better-informed decisions that support health and environmental equity in our state.”

According to the Department of Health, the map has already been used as a guide by state agencies, such as the Departments of Ecology, Commerce and Natural Resources, when issuing grants or funding projects with the goal of improving health and the environment in an equitable manner. Examples include grants for investigating and cleaning up contaminated sites, funding for waste management projects, programs for clean energy buildings and solar and electrical grid modernization, as well as urban and community forestry programs.

In addition, Min said, “community groups are using the map for their own advocacy, saying ‘Look, our communities not only struggle with air pollution, but also here are all the other things that we really need to work on to eliminate disparities. ‘”