The sea lamprey is a parasitic, blood-sucking fish. It is not pretty. In fact, it’s quite hideous. And it’s the social media darling of a one-minute creature feature, racking up 7.7 million views at TikTok’s “oddanimalspecimens.”

It’s a mystery as to why anyone would seek out this slippery tube of an animal. The little monster’s mouth is an open circle ringed in sharp teeth so it can suction itself onto the flesh of unsuspecting fish. TikTokers are treated to an extreme close-up of their tongue layered with bony plates spiked with sharp points. A chipper voiceover explains: “Once the lamprey fastens onto its victim, it extends this tongue and begins to scrape, boring into the flesh of its prey and feeding on its blood de ella.”

Cue the disgusting sound effects. This is the stuff of nightmares.

Director Charlie Engelman, BS ’14, sees things differently. It’s no mystery to this evolutionary biologist why 1.6 million viewers flock to his fascinating TikTok account of him. He’s sharing the “exciting and mysterious gems and jewels” in one of his favorite places on the planet: the research specimens collection at U-M’s Museum of Zoology (UMMZ). The educator, entertainer, and videographer has generated 25.3 million “likes” for his informative take on two-headed snakes, sawtooth leafhoppers, and gilt-headed breams, to name just a few.

Engelman’s professional interest transcends cool specimens, though. As a data-driven scientist and video producer, he is chasing down a winning formula to deliver entertaining science content to the masses. The secret: bucking conventional wisdom.

“One of the most interesting discoveries I’ve found is that you don’t need to be super silly and super fast and have a lot of stimuli in your videos for people to be interested,” Engelman says, “which is a little counterintuitive .”

The medium meets the message — and the moment — at Engelman’s popular TikTok account oddanimalspecimens.

In a makeshift studio at UMMZ, he marries media and message by exploring the climate-controlled rooms lined with shelves and drawers holding 15 million specimens: mammals, birds, amphibians, reptiles, mollusks, insects, and mites. From jars of tiny organisms stored in liquid to drawers of giant bear skulls, these samples offer the best tangible record we have of life and evolution on Earth.

Engelman favors the shortform TikTok template because it’s a fast and easy social media platform to share and test content. Over time, he has reduced production variables as much as possible to expedite production, iteration, and testing.

He shoots most clips against a blue screen using a table covered in the same blue paper. A stationary video camera and a spotlight complete the set-up. He shoots in extreme close-up, showing only his gloved hands from him. He tweaks timing, use of humor, shooting style, etc., and then takes a deep dive into his analytics and tweaks again.

The UMMZ collections include about 15 million specimens. These include:

“I was always interested in figuring out the most effective way of using museum specimens in educational film because it’s such a grossly underutilized resource,” Engelman says. “The videos that get the most views are the ones where I kind of slow down, don’t move around too much, and give people time to really look at stuff.”

In fact, a video about the remora, a “weird fish that sticks to sharks and whales” counts 13.9 million views, while a tutorial on what makes a rattlesnake rattle comes in at 13.8 million. The beloved pufferfish scored 12.5 million views, while the lesser-known spiny lumpsucker generated a mere 732,500 (despite its catchy moniker).

“That was one of the first fish I did,” says Engelman of the lumpsucker, whose fins grow together to form a suction cup on its belly (shot in yet another gnarly close-up). “If you just take a breath and try to learn from it, the ‘grossness’ goes away and the specimen becomes more interesting and enjoyable to interact with.”

Is that before or after his gloved fingers tweeze it from the jar of clear liquid? 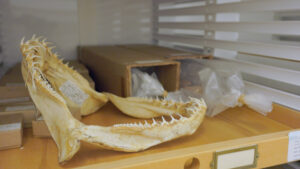 Engelman and his fans attempt to identify animal skeletons in record time while a ticking clock counts the seconds. (Image: Jeremy Marble.)

Engelman’s goal to record and share the wonders of nature began when the aspiring horticulturalist needed an activity to fill the plant-free winter hours. He started a YouTube channel and began posting wacky, lighthearted nature videos.

“I was trying to have fun with it — not be as strictly educational — and be a little bit more silly,” he says.

As a UM senior, I have applied for and beat out more than 700 competitors to win the National Geographic Channel’s Expedition Granted contest. The $50,000 prize funded the production of an online video series chronicling his adventures in the nation’s forests. That motivated him to pitch a nature video series to complete his UM honors thesis in ecology and evolutionary biology.

The UMMZ faculty-curators and collections managers welcomed the ebullient future biologist. The research facility is not open to visitors (and rarely to undergrads), but they welcomed his idea about a science/teaching series that could illuminate the collection for a new audience of artists, educators, and researchers. 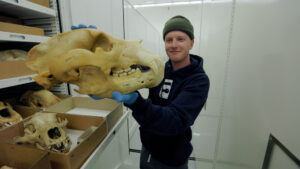 Every drawer in the specimens collection holds something fascinating, including bear skulls. (Image: Jeremy Marble.)

“The value of [UMMZ] to science and science communication is almost indescribable,” Engleman says. “As technology changes, we’re discovering ways to get new information out of [the specimens] to learn what the climate was back then and how things have changed over time. We also learn different methods of preserving these animals in the wild and how to save them.”

As he completed his degree, Engelman maintained his relationship with National Geographic, which evolved into the TV series “Nature Boom Time.” The show ran for one season on the NatGeo channel. Then the network hired him to create a 30-minute science series for kids titled “Weird But True.” That show aired for three seasons on NatGeo, Fox, and Disney+ but was canceled during the COVID-19 pandemic. 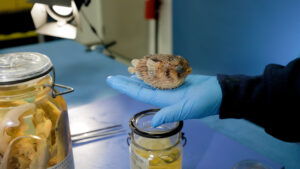 Faced with an empty production pipeline, Engelman returned to his mentors at UMMZ. He pitched an independent research study and scored yet another green light: He would showcase the museum’s specimens on social media in a fun, to-the-point video format that would appeal to a broad, general audience. The educational clips would promote the breadth and depth of the UM specimen collections and inspire viewers to visit science museums and pursue science careers. In addition, he would create a model based on data and analytics that fellow programmers, educators, and curators could replicate.

Engelman favors two specific formats so far. In one, he shows an animal while posing and answering questions. In the “speed run” format, he tries to identify an animal skull as fast as possible while the seconds tick off. Is it lynx rufus, aka bobcat? Or enhdra lutris, aka sea otter? Give him about a minute, and he can tell you. 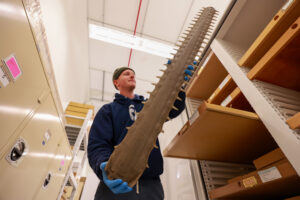 You’ll have to follow Engelman on TikTok to learn about this wild-looking specimen. (Image: Jeremy Marble.)

Engelman has set his sights on another goal as his social media presence continues to gain traction.

“I’ve found that insect specimens make people squirm; the videos don’t get as many views because people are genuinely frightened of them,” he says. “I need to find a way to introduce insects on camera to make people comfortable.”

He also envisions developing the project to showcase other UM collections and other universities’ museums.

“I always like sharing things I learn,” Engelman says, “especially about animals and nature. It’s like a little firework in my brain, and it makes me feel good.

“Everyone who’s worked on this project so far is pretty excited because collections like this are held within such a small community,” he continues. “The fact that tons of people are enjoying [oddanimalspecimens] and learn that [UMMZ] exists is a great feeling.”