Bethesda’s open-world games offer some of the best examples of freedom in gaming. They’re true sandbox game experiences, so Starfield had me very excited – until studio head Todd Howard confirmed that there is no seamless space travel from planets to space.

Basically, this means that you cannot get in your ship and fly it from a planet’s surface directly to outer space and then go back down again. Instead, you get in your ship, presumably get a short cutscene of taking off, but don’t have control over it until the ship is out in space. While you seemingly can land anywhere, it’s just a matter of approaching the planet and selecting a point on a map – like fast travel.

“People have asked, ‘can you fly the ships straight down to the planet?’ No,” Todd Howard confirms, without ambiguity. “The on-surface is one reality, and when you’re in space, it’s another reality.” As for why Bethesda decided not to allow players to seamlessly fly ships between space and planet surfaces, Howard says the team didn’t want to spend time developing something “that’s not that important to the player.”

Well, it’s important to me, Todd. I do understand that the engineering behind it would be immense and I have no idea the developmental hurdles Bethesda would have to go through – especially if it’s still based on the Creation engine, which still has loading screens for interior locations. I fully respect, and don’t want to downplay, the effort it would take to accomplish this feat.

But for me, Bethesda RPG games are all about direct control, immersion, and freedom. Skyrim and Fallout 4 aren’t the best in terms of their individual parts – areas like story, characters, shooting, quests, or even world design are done better in other games. Instead, Bethesda’s games make you go ‘wow’ by introducing you to a place and saying, ‘right, go do whatever you want.’ That big mountain at the center of Skyrim? Climb it right to the top. See that interesting satellite dish over there in Fallout 3? Walk all the way to it and explore inside. Games like Elden Ring (or Zelda: Breath of the Wild for console moonlighters) do this well too, but when it comes to translating exhilarating freedom into pure fun, Bethesda still takes the sweet roll. I can’t fill a house with cheese wheels in Elden Ring.

Which is part of the reason why this lack of manual planet-to-space travel hurts. I’ve been a fan of sci-fi and space exploration all my life – I love both Star Wars and Star Trek, gasp – and I’ve always wanted a space game in which I could hop in a ship’s cockpit, point up, break out of the planet’s atmosphere, warp over to another star system, plunge onto a new planet, land, and walk around. Despite loving games like Mass Effect and Knights of the Old Republic, not being able to manually land on planets without a loading screen was always a disappointment – ​​but I accepted the limits of technology at the time.

Enter No Man’s Sky. While not a perfect game by any stretch, finally a developer managed to realise my lofty sci-fi hopes. Being able to break or re-enter the atmosphere at any time, at any place, is glorious. I assumed that the tech was finally in place. Now all it needed was to be tied to an RPG and bingo – my perfect game.

The idea of ​​the creators of Skyrim and Fallout 3 making an ambitious space RPG with many planets, space travel, and all their trademark freedom filled me with pure excitement – especially the freedom part. It honestly never occurred to me that Starfield wouldn’t realise my ambitious spaceship hopes in the same way I can ride a horse to the top of then roll a cheese wheel back down the Throat of the World. No Man’s Skyrim, indeed. 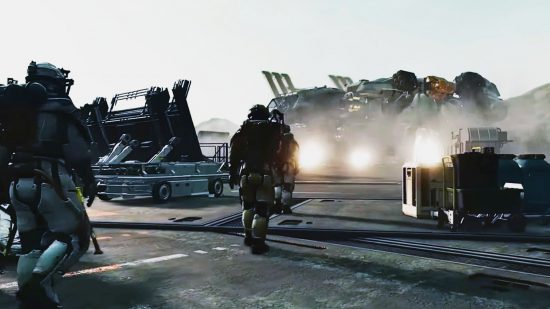 It seems I was too optimistic. What’s more frustrating is the assertion that this feature is “not that important.” I’d counterpoint that by saying that it’s vital for immersion. The difference between a cutscene landing my custom-built starship for me and doing it myself, with the knowledge that planets are real things I can skip between and possibly crash on, is a critical one for the credibility of the universe. That difference can be felt in No Man’s Sky.

In fact, without planets being real things in this way, I’m not actually interested in Bethesda’s take on space travel itself. I’m not expecting Starfield’s spaceflight to rival Elite Dangerous or its dogfighting to stand up to Star Wars Squadrons – I mean, it may do, but as mentioned above, no individual system in a Bethesda game tends to be best in class. Given seamless transitions to planetary surfaces, however, flying between planets becomes an essential brightening component of the immersive, freeform space RPG that I and many others want. Without those transitions, spaceflight already feels lacking in purpose.

Of course, the game isn’t out, and Bethesda could well have built an essential spaceflight experience that stands on its own alongside the partitioned planetary experience. Nonetheless, the game as a whole already feels diminished to me, and so is my excitement. Some people have expressed concern that Starfield’s purported 1,000 planets will feel boring, and they’d rather have fewer planets with more detail. I wouldn’t go that far, but I will say this – I’d gladly trade 990 of those planets to be able to manually soar into orbit, skim the stratosphere, then cruise over New Atlantis before pulling up again and warping into the heavens .