Researchers have developed a method that doubles the amount of carbon dioxide that can be captured with a supercapacitor.1 The devices made from coconut shell-derived porous carbon, capture CO2 as they charge, which can then be controllably released when discharging the capacitors for collection and storage. By altering the voltage applied to the supercapacitor device while it’s charging, the scientists are able to significantly increase the carbon capture performance.

Carbon capture and storage remains one of the most promising strategies to limit the impact of carbon emissions. Some industrial plants already capture carbon dioxide using amine sorbents, where heating regenerates the amines and removes the carbon dioxide – but this process is energy intensive. Low energy electrochemical carbon capture alternatives using supercapacitors are being developed2 but have limited capacity.

Now, scientists led by Alexander Forse at the University of Cambridge in the UK have developed a method to significantly improve the CO2 capture capacity of a porous carbon supercapacitor.2 ‘We were interested to see if we could increase how much CO2 could be absorbed by the supercapacitor,’ says Forse. ‘By changing the polarity of the voltage, so switching whether the positive or negative electrode is in contact with the gas, we found we could increase the amount of CO2 adsorption in a cycle.’

‘This is a very important discovery in the field of CO2 Capture and great progress from traditional adsorption on porous sorbents and toxic amine scrubbing,’ comments Magda Titirici who researches sustainable electrochemical storage and conversion technologies at Imperial College London, UK. ‘Forse and co-workers have shown that the rather limited adsorption capacity of their supercapacitive adsorption technology could be doubled by combining the positive and negative charging protocols into a switching protocol. A great discovery in a new emerging field, and an exciting research path ahead.’

Varying the charging polarity leads to increases in capture capacities 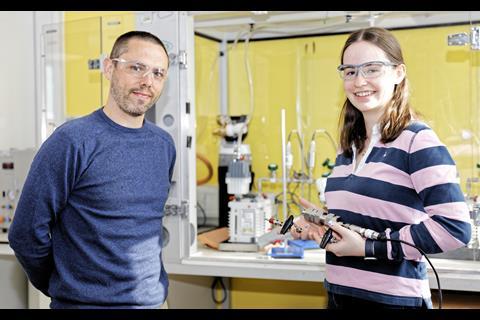 Israel Temprano and Grace Mapstone were part of the University of Cambridge team. Temprano devised a gas analysis technique, which helped the team narrow down the precise mechanism at play inside the supercapacitor 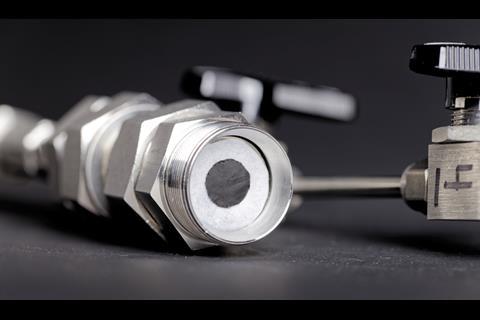 Electrochemical carbon capture approaches are very energy efficient, as almost all of the energy input is recovered when discharging the supercapacitor. However, they collect about 10 times less carbon dioxide by weight than traditional amine sorbents, meaning that 10 times more material would be needed to capture the same amount of CO2. ‘That might be okay because if the energy efficiency is much better, we might be able to deal with that and if the capacitors last for a very long time, then maybe we don’t care if we need to have a lot of them to process the emissions,’ adds Forse.

‘One of the most exciting things about supercapacitors is that, in their normal application in energy storage, they have very long cycle lifetimes, we’re talking about millions of cycles,’ explains Forse. This cyclability coupled with their very high energy efficiency for capturing carbon, could mean that they will become a much more sustainable carbon capture tool.

While the devices still capture less carbon by weight than existing amine sorbent methods, the team hopes to develop a better understanding of the capture mechanism so that it can continue to enhance the device’s efficiency towards industrial applications. ‘It’s a really exciting area to work in,’ says Forse. ‘There’s exciting fundamental science to be done, but also hopefully some really important applications in the future as well.’