In 1854, a monk with remarkable intellectual curiosity by the name of Gregor Mendel began to grow peas in the greenhouse of the St. Thomas Monastery in what is now the Czech Republic. By 1865, Mendel had made a series of observations that ultimately changed the fundamental understanding of how traits are inherited by living organisms. He presented his key findings about what he termed “certain laws of inheritance” in 1865, and subsequently his studies of it were largely ignored by the scientific community for the next 35 years. why?

Consistent with the idea that the timing of scientific discoveries needs to be appropriate for those findings to be properly appreciated, Mendel’s laws of inheritance preceded the large-scale acceptance of Darwin’s theory of evolution. Indeed, it was not until the early 1900s that widespread knowledge of Mendel’s laws was propagated, and it took even longer until his ideas were fully accepted.

At the turn of the 20th century, three new papers were published, each of which rediscovered Mendel’s laws of inheritance. In the prolog of her 2000 book “The Monk in the Garden,” Robin Marantz Henig noted, “The explanation usually given for this curious turn of events is that the world wasn’t ready for Mendel’s laws in 1865, and that by 1900, it was.”

Whether Mendel was a genius or simply a seasoned plant breeder who happened to be in the right place at the right time — an issue debated by some scholars and historians — is, for the most part, irrelevant. What is significant is that he was clearly among the first researchers to observe and publish findings that showed that traits are inherited, and he outlined predictable and strict mathematical rules that govern the passing of individual traits from parent to offspring as discrete particulate units that exist in pairs in all individuals. 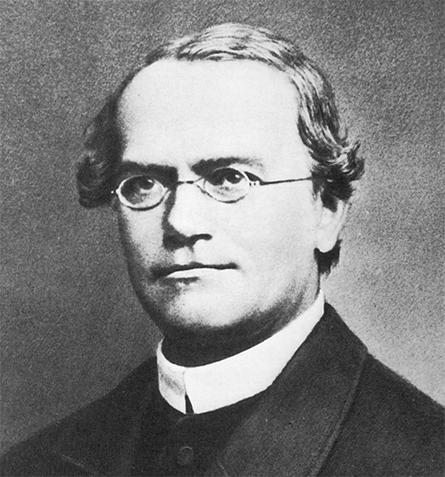 In addition to his work in genetics, Gregor Mendel (1822–1884) was a meteorologist,
a mathematician and an Augustinian friar.

Perhaps one of the main reasons why Mendel’s work remained relatively obscure until the early 1900s was that the entity known as a gene remained so nebulous in the absence of a molecular understanding of what that entity entailed. The lack of a firm understanding of how genetic material is passed from generation to generation—or more accurately, what comprises that genetic material—made it extremely difficult for contemporary scientists to accept Mendelian genetics.

Indeed, a great debate erupted following the publication of Cambridge researcher William Bateson’s 1894 book “Materials for the Study of Variation: Treated with Special Regard to Discontinuity in the Origin of Species,” in which he outlined 886 examples of discontinuous variation in heredity. Bateson, who, upon reading Mendel’s studies on the genetics of peas years earlier, reportedly felt that he had been scooped by Mendel, became one of the biggest advocates of Mendelian genetics. The idea that genetic traits could skip generations as a result of being recessive — meaning that the trait is only passed on to offspring if it is inherited from both parents — was somewhat revolutionary in that it apparently opposed some of the new ideas that had been emerging from modern statistics. 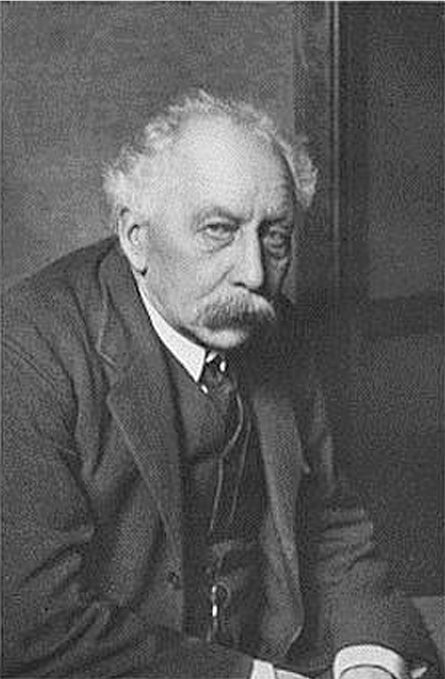 William Bateson (1861–1926) was the first person to use the term genetics to describe the study of heredity.

Around the time of Mendel, in the late 1800s, Francis Galton discovered the statistical concept of regression to the mean; simply put, if a sample point is extreme when observing random variables, then additional points observed in the future will more likely be closer to the mean and are less likely to be outliers. Galton calculated that Darwin’s evolution must occur by larger, discontinuous steps rather than by small, incremental ones to prevent regression back to the mean.

The scientists who favored the notion that evolution was a smooth and continuous occurrence were known as biometricians. Bateson and those who supported the Mendelian model were convinced that only discontinuity could explain inheritance of many traits, and thus a raging battle was fought in a series of letters and counterletters published in the journal Nature.

By the early 1900s, however, more evidence in support of Mendel’s ideas was coming from a different direction. In particular, two scientists, Walter Sutton and Theodor Boveri, contributed greatly to this enterprise.

Sutton did significant research under the tutelage of the famous Edmund B. Wilson at Columbia University in New York, publishing “The Chromosomes in Heredity” in 1903 with the conclusion that chromosomes (which were now visible under the microscope by new cytological techniques) carry Mendel’s hereditary material. 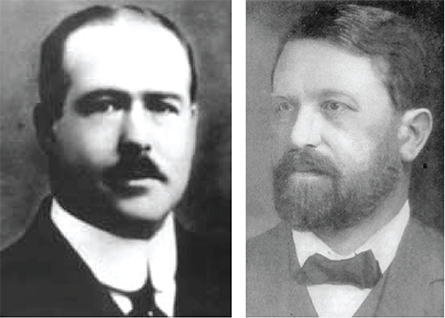 Walter Sutton (1862-1915) and Theodor Boveri (1877-1916) developed the theory
that Mendelian laws of inheritance could be applied to chromosomes.

The German cytologist, cell biologist and zoologist Boveri had a remarkable career during which he made great discoveries, often relying on his zoological experience to make use of interesting systems to study. For example, he took advantage of fertilized sea urchin eggs and later the nematode Ascaris megalocephala, a parasite of the horse gut that later in his life infected him and may have caused his death. Boveri studied the centrosome or what he termed the “centrosome” and documented its significance for cell division. He also found that the centrosome itself divides and organizes the surrounding cytoplasm in such a manner that the spindle fibers radiate from it and contact the chromosomes. Presciently, Boveri also published a lesser known study in which he proposed that aberrant chromosomes might even be responsible for the generation of cancers in his 1914 book “Concerning the Origin of Malignant Tumors.”

The work of these two scientists advanced the idea of ​​Mendelian genetics greatly and led to what is known as the Boveri–Sutton chromosome theory.

Further support for Mendelian genetics came from the work of Nettie Stevens, who had to be an extraordinarily brilliant scientist to overcome the rampant misogyny of her era. Stevens was a geneticist who trained in the laboratory of Thomas Hunt Morgan, a famous fly geneticist and Nobel laureate for his contributions to chromosomes and genetics at Bryn Mawr, where Edmund Wilson was also a faculty member. In the course of her doctoral studies, Stevens received a fellowship to travel to Germany and train with Boveri before completing her Ph.D. 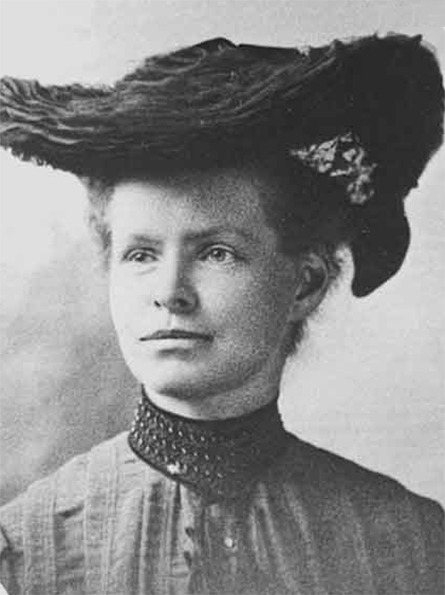 In her studies of the sperm produced by male mealworms, Nettie Stevens (1861–1912) discovered sex chromosomes.

With support from the findings of great cytologists and cell biologists, Mendelian genetics won the day. However, Mendelian genetics were ultimately combined with Galton’s mathematical advances to yield new statistical methods and give birth to the modern field of genetics. All that was missing was an understanding of what constituted the particulate hereditary element within cells and chromosomes that allowed for the passage of traits from one generation to the next. Thus, the field of genetics was born through observations and careful experimentation, but without understanding the role of DNA in this process, scientists were still looking at the tip of the iceberg.

This article is an excerpt from Steve Caplan’s new book, “Today’s Curiosity Is Tomorrow’s Cure: The Case for Basic Biomedical Research,” published by CRC Press. It has been edited for ASBMB Today. 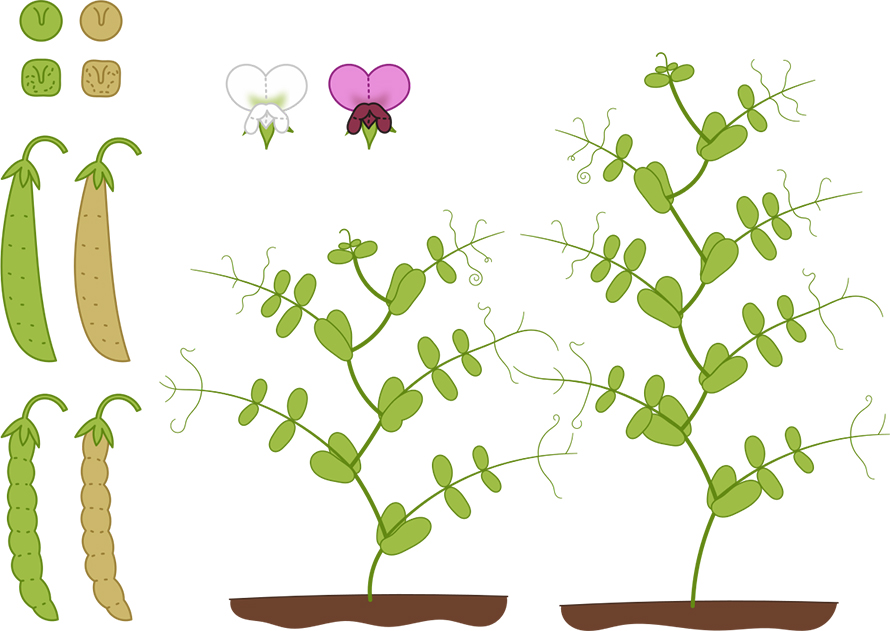 Gregor Mendel investigated these monogenic traits in his pea experiments.