Did you know that the first American woman in space had earlier pursued a professional tennis career?

Let us discover more about Sally Ride, who made history in the field of space exploration!

(Photo: NASA)
Sally Ride was in the first group of astronauts to include women.

Ride, who was born in California on May 26, 1951, went to Stanford University in California after high school and received degrees in physics, according to NASA biography of Ride.

How Did She Become an Astronaut?

In 1977, Ride responded to a newspaper ad from NASA looking for young, tech-savvy scientists to work as mission specialists.

NASA noted that she was a student at the time.

As per History, the US had evaluated a handful of female pilots for astronaut training in 1959 and 1960, but later decided to limit astronaut qualification to men. In 1978, NASA announced that six women had been selected from over 3,000 applications to become the first female astronauts in the US space program.

And Ride was one of those six women. Despite the fact that all six women went on space shuttle missions, Ride, however, was first selected to go into space, as per Smithsonian.

Space.com said that Ride began her aeronautics career on the ground, as a capsule communicator (CAPCOM) during the second (November 1981) and third (March 1982) shuttle flights as part of the ground-support crew. 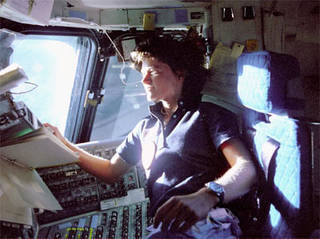 She was a mission specialist on STS-7, NASA’s seventh shuttle mission, aboard the space shuttle Challenger. She was 32 years old at that time. The mission took off on June 18, 1983, and returned on June 24, 1983.

Ride’s historic Challenger mission was not her only foray into space. On Oct. 5, 1984, she became the first American woman to journey to space for the second time when she became a part of another Challenger mission, STS-41-G. Ride was assigned to a third shuttle flight, but the Challenger disaster in January 1986 cut short her crew’s training.

Ride’s Life After Her Space Travel Were Over

After her space flight days were over, she continued to have an impact on the space program. Space.com said that Ride was a part of the incident investigation boards established in the aftermath of the Challenger and Columbia space shuttle disasters. She also served on the Augustine committee in 2009, which helped NASA outline its mission objectives.

Her love in space and science remained when she departed NASA in 1987. Ride became a member of Stanford’s Center for International Security and Arms Control and went on to be a physics professor at the University of California, San Diego.