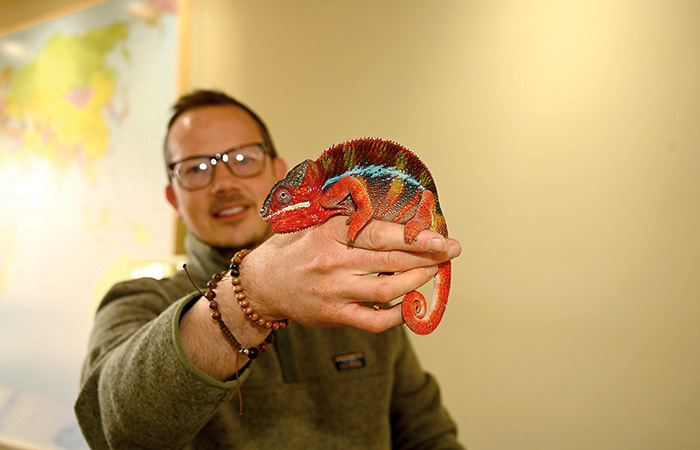 Educational presentations and school programs are nothing new to Donnie Cook, owner of Lou’s Pet Shop in Grosse Pointe Woods. He’s been toting tortoises, snakes and assorted reptiles across the Pointes for 10 of the 17 years he’s owned the beloved community pet store.

As a natural progression of his business, Cook recently expanded operations to a second location down the street. GP Zoology, 21151 Mack, allows Cook a private space to highlight the animals he has acquired and plans to acquire, as well as host private parties and presentations.

The most recent addition to his menagerie is Oliver, an 8-month-old Hoffman’s two-toed sloth that was orphaned in Central America.

“They are rescued when they get disconnected from their mothers, either through predatation or if they fall off the mom’s belly,” Cook explained, noting the tree-dwelling creatures won’t risk their lives against predators to reclaim a fallen baby from the forest floor. “Rescue groups go through and find them, raise them, bottle feed them. But when they’re humanized, they don’t have a lot of success in the wild.” 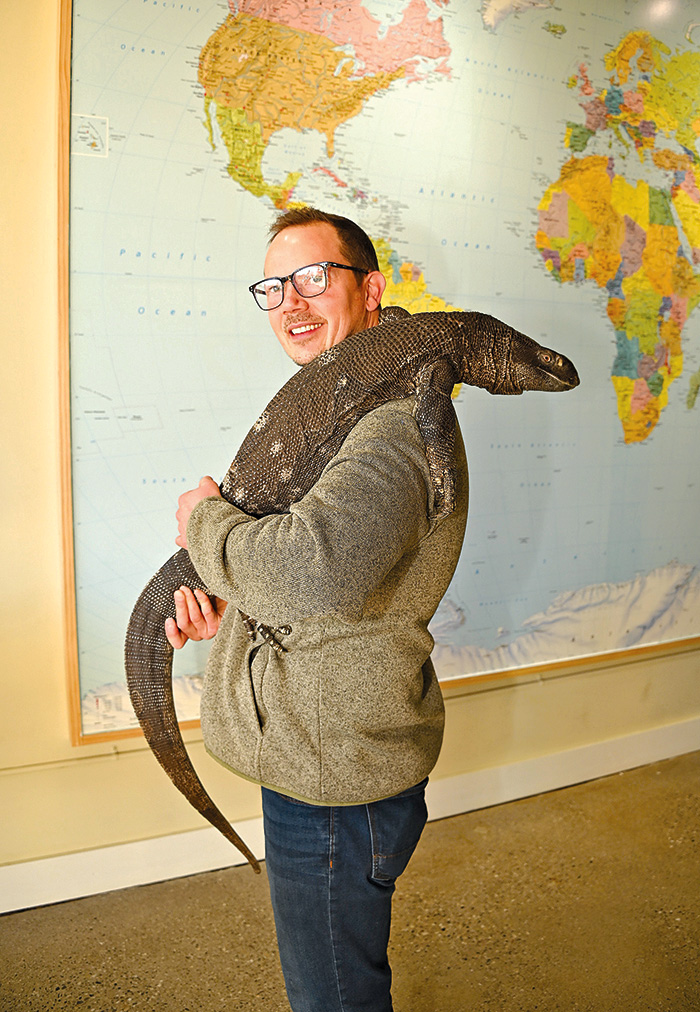 Oliver was one of two rescued sloths who found homes in the United States this summer. He is active a couple hours a day, potty trained and adjusting to the activity level at his new home.

“We’re super honored and excited to have him here,” Cook said. “We let him interact with the kids. They hand-feed him. Now he has an enrichment perch outside of his cage. Eventually we’ll have a big tree out front he can hang out on. … He’s doing so well in captivity.”

Oliver isn’t the only creature hanging around GP Zoology, which has a USDA federal license to have exotic animals. A peek into the business’s back room reveals an incubator for reptile eggs, as well as tub upon tub of reptiles, from crusted, micro and chameleon geckos to Rankins dragons.

A “snake wall” is also housed in the back room, featuring a family of green tree pythons, among other species.

“This space is hybrid,” Cook said. “It’s an educational space and a sanctuary space. We’re going to be taking in more rescues and breeding animals. Part of our mantra is being sustainable with pet keeping. We want to produce as many animals as we can. Part of that is utilizing space here to produce pets for kids in the community. 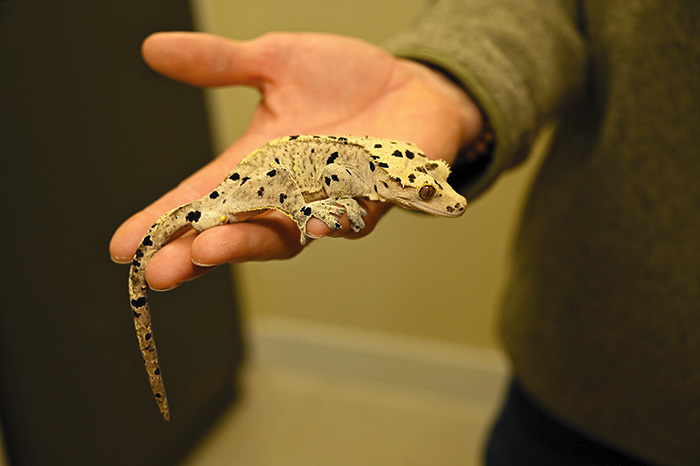 One of several crusted geckos at GP Zoology.

“… We love to work with reptiles,” he added. “It’s rewarding to see eggs laid, to incubate them properly, see them hatch and raise them up.”

The back area will also house a mammal room for breeding hedgehogs and hamsters, including hairless hamsters for children with allergies.

Having animals on hand, Cook said, will allow children to learn about earth science or environmental science with something tangible, “so they can connect to it and see why we think about the things we do.”

He also hopes to help all ages become more comfortable with and knowledgeable about certain animals.

“Part of growing up, for me, I remember walking into pet shops and wanting to touch and feel and hold the animals,” he said. “My goal is for kids to get outside the mindset of having a fear of tarantulas and snakes. I want to open their minds a bit about what’s out there.”

The past year or so, Cook has been working hard to get GP Zoology up and running in a building that sat vacant 30 years after its last tenant, a paint store, moved out. The open floor plan educational space offers plenty of room for private parties and presentations. During construction — and currently — the words “Dinosaur Research Center …” adorned the front window.

Among the ways Cook plans “to tie in dinosaur history with the living reptiles we have here” is by showing a life-sized replica of a velociraptor skeleton in the main room. It’s one of many items on his checklist for him.

“We have so many different ideas forming, like a reading night for kids,” he added “… and Science Club, where once a month kids can do science projects relating to animals.”

He plans to dot a wall map with QR codes that kids can scan to learn about individual animals. He’d also like to add a wall of featured animals, as well as a stingray touch tank, and display an Argentine tegus and Madagascar tree boa in the main room. Fiona, a tortoise, will also have a home at GP Zoology. 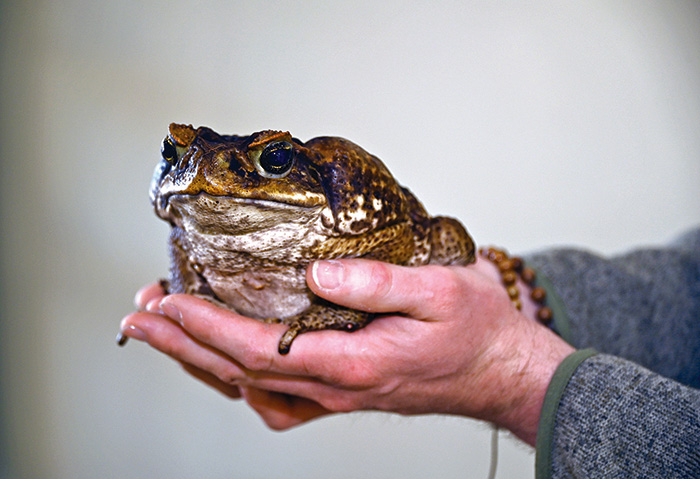 Bubba checks out the scenery at GP Zoology.

During a recent visit to GP Zoology, Cook introduced guests to residents from Lou’s, including Bubba the toad, Arnold the black-throated monitor lizard and Skittles the panther chameleon, among other well-behaved critters.

“When a human being locks eyes with an animal, there’s a chemical release of endorphins in the brain,” he continued. “There’s a surge of energy, of excitement when you see an animal. Scientists believe there are two reasons for that.”

The first reason, he said, is survival; when a person encounters a wild animal, they get a burst of energy that allows them to run away. The second is hunting; the burst of energy needed to spear a salmon, for example. 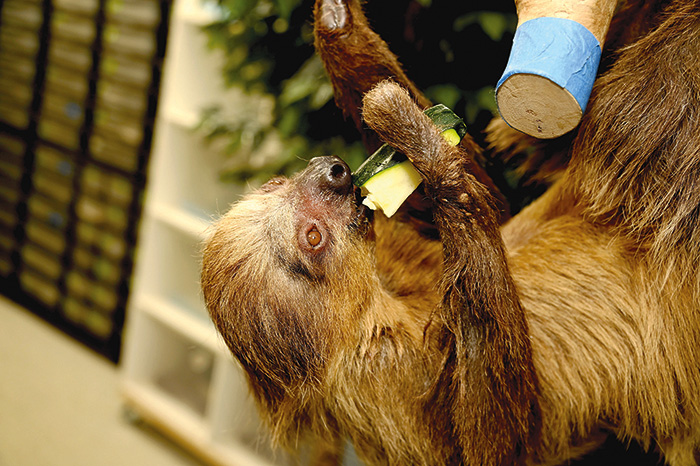 “I believe there’s a third reason, too,” Cook said. “I believe you connect with a living soul when you look into an animal’s eyes. I’m a faithful person. I see God in every creature.”

While the brick-and-mortar space is open by appointment only, Cook will continue to share his love and knowledge about various animals throughout the community.

He provides school programs that supplement STEM curricula, presents to Boy Scout and Girl Scout groups and currently is working with the new zoology classes at Grosse Pointe North and Grosse Pointe South high schools, “to see what their needs might be to offer them a tangible learning experience.”

GP Zoology’s soft opening has been met with accolades from the community. Cook said he’s already booking events into April. He plans on hosting an open house in late February, for which tickets will be sold and a portion of proceeds will benefit charity.

In the meantime, to book a party or find more information, visit gpzoology.com.