Turbulence can be a nuisance for planes and boats, but for marine plankton, researchers have now shown that turbulence can be a boon. In simulations, they found that plankton that can hitch rides on the right turbulent ocean plumes can double their swimming speeds [1]. The researchers say that this ability could help a variety of tiny ocean organisms quickly rise to the water’s surface to reach food at night before returning to its murky depths to escape daytime predators.

Plankton consist of a wide variety of small and microscopic organisms that drift in the ocean. Unable to propel themselves very effectively, they travel by riding ocean currents. For example, the planktonic larvae of the Chesapeake blue crab ride vertical and horizontal water currents when migrating toward the shore and up an estuary.

One way that plankton monitor these currents is through tiny hair-like structures on their bodies. These hairs can sense minute variations over time in the gradient of the current’s velocity—the difference between the flow speeds on opposite sides of the organism. But, with a propulsion mechanism much weaker than the ocean currents, it has remained unclear how a plankter (singular of “plankton”) might use this information to efficiently navigate through swirling water.

Researchers have used machine-learning models to find the navigation strategy. However, such methods have been shown to derive ineffective schemes for turbulent water. Interpreting the output of machine-learning models is also difficult given the black-box nature of these models. Rémi Monthiller of the Institute for Research on Nonequilibrium Phenomena (IRPHE) in France and his colleagues took a different approach. They came up with a navigation strategy based on equations of motion that optimize the rate at which a plankter moves.

In their simulations, the team modeled a planktonic organism that can measure the velocity gradient of the surrounding fluid and that can rotate its body to control its swimming direction. The equation that determines this direction is based on a few simple assumptions about the local flow and the goal of maximizing upward motion. They placed a plankter at the bottom of a turbulent fluid with turbulent structures much larger and faster-moving than the organism. So the plankter experienced a relatively smooth ride, but there was still a flow gradient that the plankter could detect.

The team found that the plankter continually rotates its body to “catch” the fastest nearby current that is moving upward, which the team calls surfing. Monthiller notes that this strategy leads to zigzaggy paths, but it still helps the plankter reach the surface in half the time of a plankter that always points upward. That achievement “is no small feat for an organism where gaining a few percent is usually hard work,” Monthiller says.

While there is no direct experimental evidence for this behavior, Michelle DiBenedetto, an engineer at the University of Washington, Seattle, who studies the motion of plankton, says that she and her colleagues have observed similar behavior in some gastropod larvae. The two research teams plan to collaborate to test the new model. “Our observations indicate some active behavioral response to the turbulence,” DiBenedetto says. “It is likely less optimal than the surfing strategy. However, Rémi’s [study] gives us a great framework for what to look for in our data.”

DiBenedetto says that the consensus used to be that turbulence was detrimental to plankton motion, as it was thought that tossing the plankton around in the swirling fluid reduced their ability to navigate between two points. Now, however, researchers increasingly appreciate that plankton don’t just go with the flow. “This work shows us the potential impact that different sensing strategies might have on transport,” she says. “The results are super exciting.”

Jessica Shang, a mechanical engineer at the University of Rochester, New York, who studies biological fluids, says the results should be widely applicable. “Their performance is not particularly sensitive to how intense the flow environment is, or how noisy the plankter’s sensing is, or how quickly the plankter reacts,” she says.

Explaining the motion of marine plankton is also key in figuring out ocean dynamics in a warming world, Shang says. “Plankton have ramifications not only on the food chain but also in the uptake of carbon in the ocean over time,” she says, so understanding plankter motion is essential for improving models of the ocean and the atmosphere.

Katherine Wright is the Deputy Editor of Physics Magazine.

A bio-inspired detector the size of a US penny can identify the unique odor profiles of different gases, something that could help in detecting food freshness and product counterfeits and in designing new cosmetics. Read More » 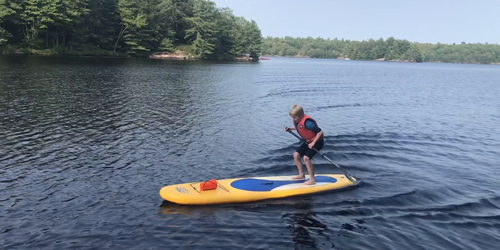