Oct 12, 2022 | LITTLE ROCK — The University of Arkansas for Medical Sciences (UAMS) College of Medicine invested Ronald D. Robertson, MD, professor and chair of the Department of Surgery, in the Gilbert S. “Gil” Campbell, MD, Ph.D. Chair in Surgical Leadership and Innovation during an Oct. 5 ceremony.

“I have been at UAMS for 37 years, 28 of those on the faculty, and I’ve always been very proud of what this institution stands for and what our mission is,” said Robertson. “Everybody that knows me understands that I am very big on teams, so this is my chance to say thank you to Team UAMS for all it has done for me and certainly for all the outstanding care it has provided my patients. My career at UAMS has been so much more than I could ever have dreamed of, and I’m so grateful for everyone who has been part of this journey.”

Robertson also serves as director of surgical services, trauma medical director and UAMS chief of staff. He has devoted his entire career to UAMS, the care of injured patients and improving trauma care in Arkansas. He has played a pivotal role in the development of the Arkansas Trauma System, and he continues to be a staunch advocate for trauma education.

“UAMS takes care of people who can’t otherwise receive care — we not only teach physicians to treat people in need but we give doctors the opportunity to achieve their full potential,” said Kent C. Westbrook, MD, distinguished professor in the Department of Surgery. “I think Ron Robertson is one of those people that we’ve given the opportunity to achieve. I congratulate him and think he’ll carry on the ideals of Dr. Campbell and UAMS.”

Robertson is the inaugural recipient of the endowed chair, which was named for the late Gilbert S. “Gil” Campbell, MD, Ph.D. The chair was established by generous philanthropic gifts from family, friends and colleagues of Campbell, as well as those who were inspired to honor his legacy and many accomplishments of him.

An endowed chair is among the highest academic honors a university can bestow on a faculty member. An endowed chair is established with gifts of at least $1 million, which are invested, and the interest proceeds used to support the educational, research and clinical activities of the chair holder. Those named to a chair are among the most highly regarded scientists, physicians and professors in their fields.

“We know that in the hands of Dr. Robertson, the relationship between the past and the future — the work that has been done and will be done — will be preserved,” said Cam Patterson, MD, MBA, UAMS chancellor and CEO of UAMSHealth. “I want to thank him for accepting this profound and important chair, and I want to also thank the Campbell family and donors for making it possible.” 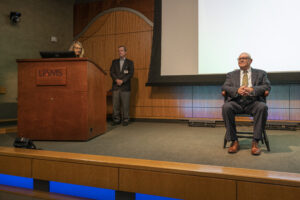 A nationally renowned surgeon, Campbell was at the forefront of open-heart surgery breakthroughs while serving in positions at the University of Minnesota, Oklahoma City VA Hospital, where he was chief of surgery, and the University of Oklahoma Medical Center, where he was chief of thoracic surgery. Campbell had an illustrious career at UAMS, serving as professor and chair of the Department of Surgery from 1965 to 1983, and remaining as professor emeritus until 2000. In 2004, he was inducted into the inaugural class of the UAMS Hall of Fame. In 2015, he was honored with a Citation by the Senate of Arkansas for his invaluable contributions to UAMS.

“This is a day to recognize the past, the present and think towards the future and to celebrate the surgical leadership that has such a rich tradition in Arkansas,” said Susan S. Smyth, MD, Ph.D., executive vice chancellor of UAMS and dean of the College of Medicine. “I don’t believe we could find a better surgical leader who has the commitment, the integrity and the vision for where surgery in Arkansas could go than Dr. Robertson. He is building on the strong tradition that Dr. Gil Campbell established as a phenomenal surgical leader and innovator.”

Robertson completed his undergraduate studies at the University of Arkansas at Fayetteville, earning a bachelor’s in zoology with minors in chemistry and psychology. After graduating from the UAMS College of Medicine, he completed his residency in the UAMS General Surgery Program under the leadership of Robert Barnes, MD During his final year, he received the Robert M. Bransford Memorial Outstanding Chief Resident in Surgery award. It was during this time that Robertson found his calling for trauma care and education. His mentor, John Cone, MD, inspired him to complete a fellowship in trauma, critical care and burn surgery at UAMS. Also during this time, he proudly served in the Arkansas Army National Guard, retiring at the rank of major.

Robertson’s greatest passion is the education of residents and students. He considers his greatest achievement to be the more than 140 residents he has trained and countless medical students he has advised.

Among his many honors, Robertson was elected to Alpha Omega Alpha, the national medical honor society, in 2005. In 2003, he was named the Arkansas Children’s Hospital Doctor of the Year. In 2004, he was named the UAMS Department of Surgery’s Surgeon of the Year. He has been recognized three times by the Department of Emergency Medicine with the Outstanding Faculty Award. A highlight of his career from him was receiving the ArkansasBusiness Health Care Heroes Physician of the Year in 2018.

“It’s quite an honor to speak on the evolution of trauma care in Arkansas and the legacy of Dr. Campbell, who really created the trauma baton, which has now been passed down to Dr. Robertson,” said Charles D. Mabry, MD, associate professor in the Department of Surgery and general surgeon at Jefferson Regional Medical Center. “I think, without any question, Ron is a great leader of trauma care for Arkansas.”